It was 11PM and as I sat waiting in the idling car, my excitement was starting to build.

Outside, long shadows under the lights of the urban housing complex moved about busily.

One of the shadows got closer to the car and tapped on the window.

“Want me to get anything else besides pastries from the convenience?”

My wife had just finished her hurried preparations from her sister’s apartment upstairs, as I waited for her and the rest of the crew.

My brother and his wife, Sandy were soon to follow, walking at a brisk pace to the car with bags, rods and gear in hand.


We had all just returned from a 3 day trip from Taiwan to Korea and had just managed to rent a car upon our immediate arrival to Seoul.  Our next destination was the North East portion of the country in the province of Gangwon-do.

Gangwon-do has long been on our bucket list as a fly fishing destination.  The reason being the elusive cherry trout that resided in these cold and clear mountain waters.  Gangwon-do is  one of the last encampment for native and introduced wild trout on the Korean Peninsula.  I myself had redemption on my mind as I had a chance to fish for a day the prior year with no success.

With all parties on board and gear loaded, we were ready to go.  I stepped on the accelerator, with high hopes of tight lines and occupied landing nets.

5 hours later we had arrived and it was nearly dawn.  We found a local bathouse to wash and soak for about an hour.  The short reprieve was surprisingly effective in rejuvenating the mind and body from the lack of sleep and long hours of traveling.

In the grey dawn light, we set out again to a meeting point given to us by the Troutsquad crew in Korea.

As we pulled into the small lot, we saw a group of 5 men in various stages of getting waders on and lines, through ferrals.

Introductions were made while also strategizing the plan of attack for the day.

Brisk banter and jokes made us realize quickly, that we were amongst kindred spirits.

The morning started with a walk, through a boulder and rock strewn freestone river unlike any I have seen in my experience, fishing outside Korea.  The river was not large and it meandered through sharp and sheer rock faces.  The setting seemed uniquely, East Asian.

Even in the foreign and new environment, the usual fishy looking undercuts, structures, seams, tailouts, and all other likely trout lays, presented themselves; making the situation less intimidating.

The group watched as their American brethren tried their hand at the water.

The pressure started to mount as we did not want to disappoint our newfound friends.

The tension from the Troutsquad began to be palpable, as well.  We could feel them willing us silently to succeed in our quest.

We experimented with a number of tactics and managed to put a couple of fish on the board.

Although not trout, it was fascinating to catch new species.  However the pressure was now really starting to build.

We moved frequently from point to point and soon met with “Aquamousse”.

His sharp and weather exposed face with kind and knowing eyes gave off the aura of what we like to affectionately call back home, “a fishy dude”.  He stepped immediately into the role of teacher, with interesting facts, concepts and theories.

He led us to a new point and he was soon on to some cherry trout.  The rest of the crew gathered yards away from the bank to give us the next crack at the now rising fish.

Tom had taken to being my guide for the day and deftly tied on a black caddis that were seen flying in the shaded mountain brook. 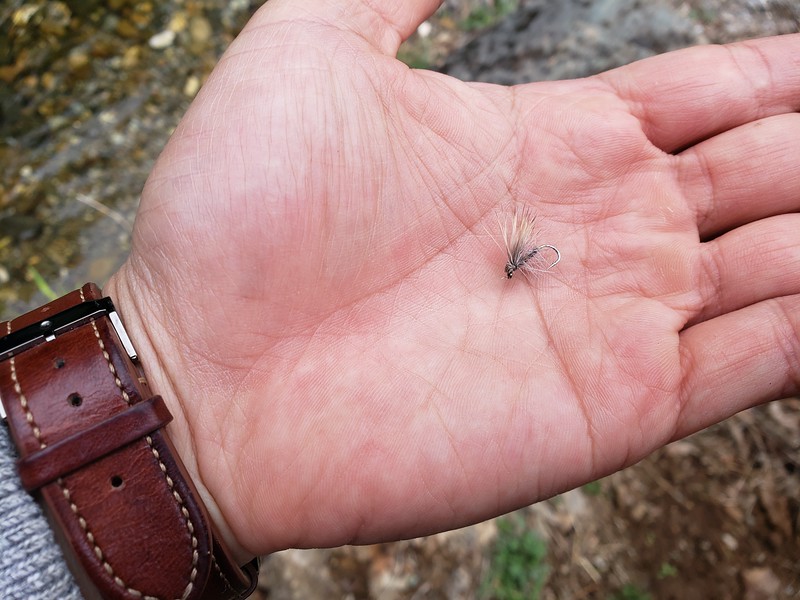 The fly gently landed directly on a V Seam with just the tippet and leader on the water.

A quick flip at the end of its drift put the fly in the air and the forward cast put the fly directly on to the other line of the V seam.

A sharp flash underwater and a quick take from a fish!

The mounting pressure had broke and the relief of all, could be felt and heard as we all excitedly gathered to take a quick photo and send my first cherry trout back to his home.  I stayed in the spot and was able to wrangle another fish but now it was my brother’s turn.

We moved upstream where the water took a gentle bend leading into a long straight run.  My brother crawled into position kneeling to keep his profile low.  On the opposite bank loomed a 20 feet stone wall that supported a road.  As cars passed one local farm truck stopped to see the spectacle below.

Fish were rising and my brother was soon keyed into a consistently rising individual.

One cast and a missed strike.  The excited and simultaneous hisses punctuated the mountain in unison as all the spectators, including the now intrigued farm truck driver watched the missed strike.

This repeated for a couple more times, when finally the hook was set and the rod gave a beautiful bend.

Our first meeting with the Cherry trout turned out to not be the highlight of our trip.

The meeting of new friends and kindred spirits far exceeded what any fish could have given us.

I hope to one day be able to show them our own home waters.  Until that day fish on, brothers.