The late morning start did not put any strain on the mood.

Usually there is a sense of rush, the nearer I get to the river, that is amplified when I’m getting there later in the day.

The mood stayed light because we were meeting a friend on the river.

Although we only had an idea of where he would be, it didn’t take long to spot him, as we cleared a bend in the road.

He was immediately recognizable by his familiar attire.

It seems many  serious anglers will have figured out their layering system and have a habit of wearing the same outfit.

The less decisions to make on what to wear, prevents ever being unprepared, under dressed or overdressed.

As we got parallel to where he stood in the river, we noticed a healthy bend in his rod.

“That is definitely him! Of course he’s hooked into a fish.” I stated matter of factly to my brother who was now parking his truck behind Adrian’s.

Adrian is one of those people that is truly fishy and when he is offering advice, it is beneficial to listen intently.

What is not surprising is that even at his level, he continues to learn and improve by working on different aspects of his game.

He makes a habit of listening to other successful fishers and apply it to his own experiences. There seems to be little room for complacency, close mindedness or ego.

Today he was working on what we all like to refer to as, “the skinny stuff”.

We found him in a particularly delicious piece of the river that was on a diet of about; calf deep, riffly waters.

“They’re flashing down there.” He said, as his gaze settled on an open zipper in the stream.

He continued his teaching points,

“With summer in swing, you may want to try going down in tippet and use lighter and smaller nymphs.”

With that, he went to shore to greet my brother who was now just getting down to the stream.

After a bit of time and a change in offering to a size 20 perdigon on the point, I finally found him.

The sighter paused at the beginning of the drift and with the hook set, he came to net reluctantly.

I should say very reluctantly as only a big fish can show you.

After releasing the 20 inch brown, I watched as Adrian masterfully angled a few more fish out of some seams upstream

We rendezvoused back at the dirt pull off to have a light snack by the trucks to hold us over for the rest of the day.

My brother recounted the fish he was able to fool during that time by going downstream to chase rising fish.

We quickly finished our snacks and ran through a couple of options in our heads, of areas to nymph within close range of where fish may also be rising.

The choice of water that we decided upon was not too far downstream of where we had begun the day.

I like to break this section down and refer to them as 2 separate beats.

The trout here are wary and hard to catch.

The almost mirror clear run eventually meets a mix of shallow riffles, rapids and some deeper pockets and plunges on the far bank.

Downstream of the small rapids was the second beat, characterized by a deep fast run that eventually tailed out to a deep trench pool that always had rising fish (even in winter).

After striking out on the top section of the first beat, I knew my rig was better suited for what would come below.

I was eager to also be focusing on working shallow fast water and did not want to spend too much time on this portion of the river.

I moved in to the second half of the first beat, working each current seam and pocket.

As I got near the opposite bank I drifted my 2 fly mono rig in the soft zone behind a boulder and 1/3 of the way through its drift, I was on a fish.

Something about a large alpha trout when they first get hooked, come off as not being too concerned, almost nonchalant.

Perhaps they have been king or queen of their realm for so long, they are more irritated than concerned that something dares challenge their superiority.

Or maybe, they are hooked less often so are not immediately aware of their predicament.

This particular alpha however soon realized that he did not like the position he was in.

He vaulted high into the air as if to show me what I would be missing out on, if I bungled this.

His next move was to go downstream to hide behind another rock then soon after he bolted down the small rapids.

I gave chase, not looking where I was heading, doing everything to stay on two feet by feel.

I managed to stay standing as he burst out of the water again.  2 anglers working the bottom portion of beat 2 were now painfully close but the cavalry had also arrived.

My brother who had been working beat 1 and had happened to see me running down the rapids in my ‘River Runs Through It’ rendition.

He had made a valiant and possibly record breaking run downstream to reach me.

Hurdling fallen trees and braving treacherously slippery rocks in the process; doing his best, ‘Last of the Mohicans’ rendition.

Up until this point I had thought this fight was mine alone as I couldn’t possibly imagine that he would get to me in time.

Yet there he was, soaking wet as he had just taken a plunge in the drink.
“I hope this fish is worth the swim!”  He yelled up to me.

“It is!” I panted, almost pleadingly.

With some deft handling and a quick raise to the surface, my brute of an adversary was in the net. 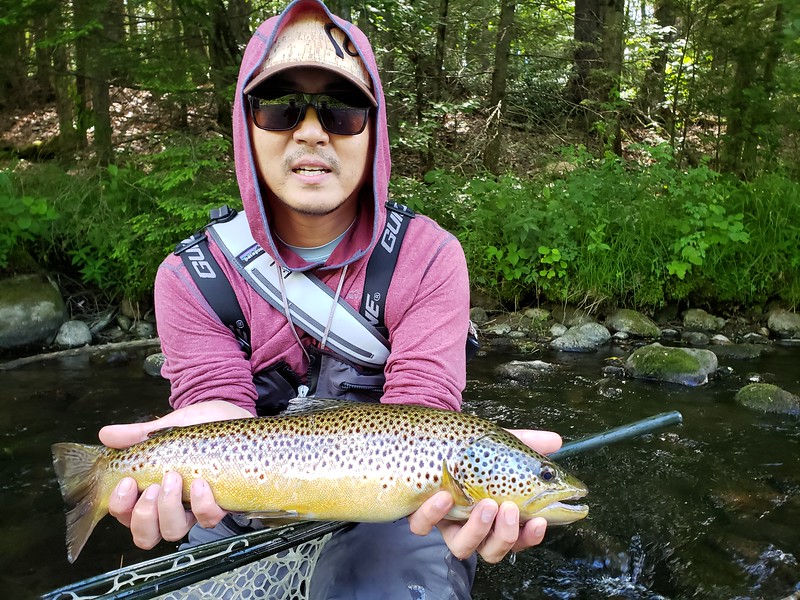 After some photos and the release all I had left was adrenaline shakes and some realizations.

I realized that so many things had culminated up until this moment and many had a direct effect on the outcome.

Possibly the change in 5x to 6X tippet can not be definitively confirmed as a causative factor but I can theorize as to why it was an effective switch.

The following  points also could be rationalized and argued as reasons for today’s success.

~The change from dredging flies to smaller lighter nymphs.

~The goal to work on a specific aspect of the fly fishing game.

~Sticking to the game plan on what water we were targeting and how.

But most importantly, that I had a band of brothers that gave me the right information, direction and a dunk in the water so that I could have my moment. 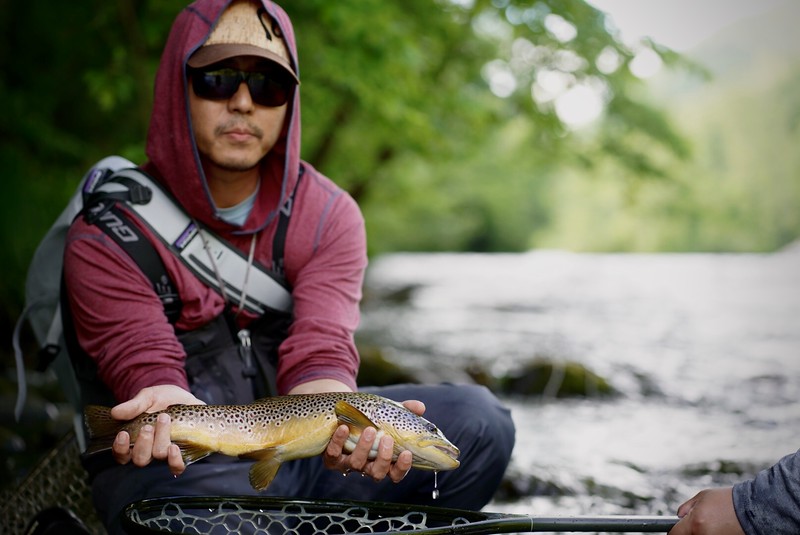